As a credible, global insulins player, Biocon made sure-footed progress towards its mission of providing a high quality, affordable insulin analog for people with diabetes globally when the European Commission approved the biosimilar Insulin Glargine application submitted by its co-development partner Mylan.

Insulin Glargine is a long-acting insulin analog that offers better glucose control with the convenience of once daily injection versus the discomfort of multiple daily injections and reduces the possibility of developing hypoglycemia (low blood sugar). It is prescribed for adults with Type 2 diabetes as well as adults and pediatric patients (children 2 years and older) with Type 1 diabetes.

The biological process of manufacturing Insulin Glargine starts with a yeast cell, Pichia pastoris, which is genetically engineered to express the human Insulin Glargine protein, when grown in culture, which is then purified and formulated. The quality of the Insulin Glargine is established and controlled using multiple orthogonal analytical techniques.

The CMC development, non-clinical and clinical studies for Insulin Glargine in India culminated in its approval and subsequent launch under the brand name BASALOG® in 2009.

In 2013, we expanded an existing global partnership with Mylan to include insulin analogs, Glargine, Aspart and Lispro. Subsequently, the global INSTRIDE clinical program was initiated to establish the efficacy, safety and immunogenicity of biosimilar Insulin Glargine in comparison to the reference product in patients with Type 1 and Type 2 diabetes.

On conclusion of the trials, a regulatory application was submitted to the European Medicines Agency (EMA) in 2016 through our partner Mylan, which included analytical, functional and pre-clinical data, as well as results from the PK/PD and confirmatory efficacy/safety global clinical trials for biosimilar Insulin Glargine.

In 2015, our product became the first Insulin Glargine to be approved in Mexico as per the country’s biologics approval pathway.

Approvals Across the Globe

Subsequently, we achieved a major regulatory milestone with approval of our Insulin Glargine in Japan. The approval followed the successful completion of initial development by Biocon and local comparative Phase I followed by Phase III clinical studies in over 250 Type 1 diabetes patients by our Japanese partner. This was Biocon’s first biosimilar approval in a developed market and the first biosimilar from a company in India approved in Japan. The approval and launch of our Insulin Glargine disposable pen in Japan in 2016 was an important continuing endorsement of our product quality.

Biocon’s innovative, pre-filled pen Insulin Glargine pen was launched in 2015 as Basalog One™ in India, where it continues to make a significant difference to diabetes patients on insulin therapy. 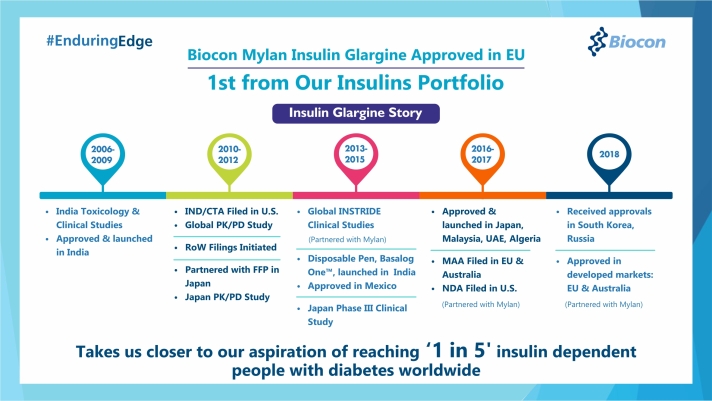 Till date, 1,700 patients and healthy volunteers have been evaluated in comparative clinical studies conducted across the U.S., EU, Japan, India, Canada and other countries for establishing the safety and efficacy of this important treatment.

In January 2018, the EMA’s Committee for Medicinal Products for Human Use (CHMP) recommended Insulin Glargine co-developed by Biocon and Mylan for approval. After CHMP’s positive opinion, the European Commission approved the sale of the biosimilar Insulin Glargine, Semglee™ 100 units/mL 3 mL prefilled disposable pen, in March 2018. The product thus received approval in all 28 European Union (EU) member states and the European Economic Area (EEA) member states of Norway, Iceland and Liechtenstein.

In the U.S., Mylan’s application for Insulin Glargine under the NDA pathway is under review by the U.S. FDA.

Biocon’s biosimilar Insulin Glargine has also been approved in Russia, Mexico, South Korea, Malaysia and 28 other countries, enabling us to provide an affordable treatment option to millions of people with diabetes worldwide.*

*Development program adjusted in various markets due to regulatory requirements.