By Narendra Chirmule, PhD,  Sr. VP & Head of Research and Development at Biocon.

However, sometimes, the army fights against itself.  i.e. the cells and the proteins of the immune system attack the body.  This phenomenon results in a disease, called autoimmunity.  Depending on the organ affected, autoimmunity can be against the nerves (multiple sclerosis), muscles (myasthenia gravis), joints (rheumatoid arthritis) etc.

Through innovative methods, antibodies (bullets) which are generally made by the body to protect from viruses and bacteria, are designed to block and cure autoimmunity.  This concept is described below. 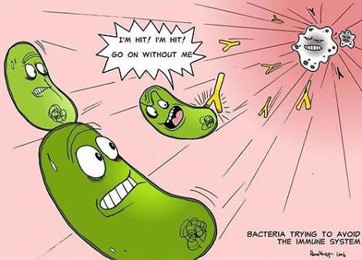 Rheumatoid arthritis is an autoimmune disease that causes inflammation and intense pain in the joints (knees, elbows, wrist etc.). In patients with RA, the body’s immune system mistakenly identifies healthy cells as invaders cells.  The immune system uses many proteins as “bullets” to attack the cells of the joints.  One such bullet is tumor-necrosis-factor (TNF).  TNF binds to the TNF-receptor on cells and kills the cell.  The death of the cell causes dysfunction of the joints, which causes intense pain.

How are antibodies used as Drugs?

An antibody is a protein complex used by our immune system to identify and neutralize foreign objects such as viruses and bacteria.  Each antibody recognizes a specific “antigen” unique to its target.  Its shaped like a “Y”, and the tips of the Y (called F-ab, for antibody binding) are binding sites to the foreign object, and the base of the Y (F-c) binds to a receptor on a cell, so that it is anchored.  It is a complex protein made of two chains, large (heavy chain) and small (light chain).  The two chains intertwine to form a groove that can bind to the foreign object with a very high degree of specificity.  The primary role of the antibody is to bind to and eliminate foreign objects from the body.

What is an antigen?

An antigen is a substance which causes the body to make antibodies.  Antigens on foreign objects such as viruses and bacteria, are useful for antibodies to eliminate these harmful pathogens.  Sometimes, the immune system mistakenly binds to self antigens (such as on cells of the nervous system, or muscles) and cause autoimmune diseases such as multiple sclerosis and myasthenia gravia.  One such autoimmune disease being rheumatoid arthritis.